Survey ● The nature of the apartheid system, including: – political, economic, social and demographic issues in South Africa in 1960
– apartheid: ideology, policy and practice
– impact of apartheid on rural and urban communities

Focus of study ● National resistance to apartheid, including: – the nature, growth and impact of the African National Congress (ANC) and the Pan Africanist Congress (PAC)
– significance of the Sharpeville Massacre
– Mandela as head of Umkhonto we Sizwe, ‘The Spear of the Nation’ (MK)
– Rivonia Trial, imprisonment on Robben Island, ‘Free Mandela’ campaign
– role of Mandela’s leadership of the ANC
– significance of Stephen Biko and the Black Consciousness Movement
● Repression and control by South African governments, including: – the nature, impact and significance of tactics of repression and oppression
– role of South African security forces
– role and significance of Bantustans and independent black states
– relations with neighbouring African countries
– international responses to South African policies
● End of apartheid, including: – political, economic and social factors contributing to the end of apartheid
– international factors contributing to the end of apartheid
– problems facing the National Party and the ANC in the transition to democracy in South Africa 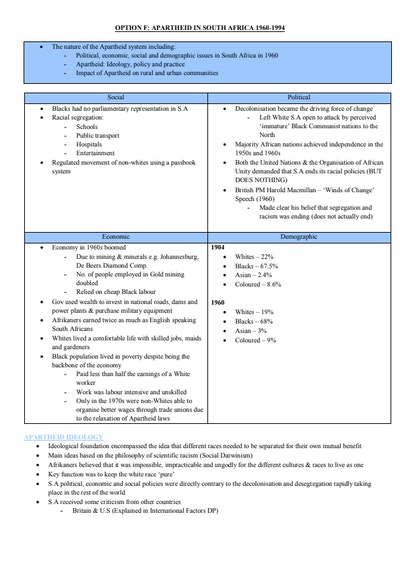