Survey ● Growth of European tensions, including: – the collapse of collective security – Abyssinia, the Spanish Civil War
– Britain, France and the policy of appeasement
– significance of the Nazi–Soviet Non-Aggression Pact

Focus of study ● German foreign policy, including: – aims and strategy of German foreign policy to September 1939
– impact of Nazi ideology on German foreign policy to September 1939
● Course of the European war, including: – German advances: the fall of Poland, the Low Countries and France
– the air war and its effects: The Battle of Britain and the Blitz, the bombing of Germany
– Operation Barbarossa, the Battle of Stalingrad and the significance of the Russian campaign – Battle of El Alamein and the significance of the conflict in North Africa to the European War ● Civilians at war, including: – social and economic effects of the war on civilians in Britain, Germany and the Soviet Union – the nature and effects of the Holocaust in the Nazi-occupied territories
● End of the conflict, including: – ‘D’ Day and the liberation of France
– Russian counter-offensives 1944
– final defeat 1944–1945
– Nuremberg War Crimes trials 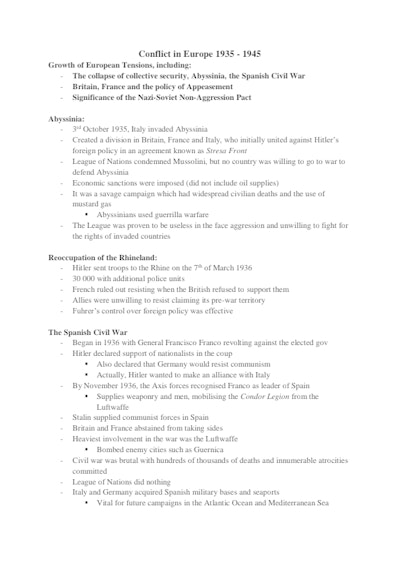