A condensed summary of notes for the core study Pompeii and Herculaneum with relevant evidence to each syllabus points and contemporary issues (new discoveries up to 2020!) highlighted by the 'reconstruction and conservation of the past'. Each syllabus point is discussed comprehensively, with examples and quotes that will guide you to write the best short responses :D

These notes are based on the Ancient History Stage 6 Syllabus (2017): SURVEY

FOCUS OF STUDY Investigating and interpreting the sources for Pompeii and Herculaneum: The evidence provided by the range of sources, including site layout, streetscapes, public and private buildings, ancient writers, official inscriptions, graffiti, wall paintings, statues, mosaics, human, animal and plant remains from Pompeii and Herculaneum, as relevant for:

Reconstructing and conserving the past 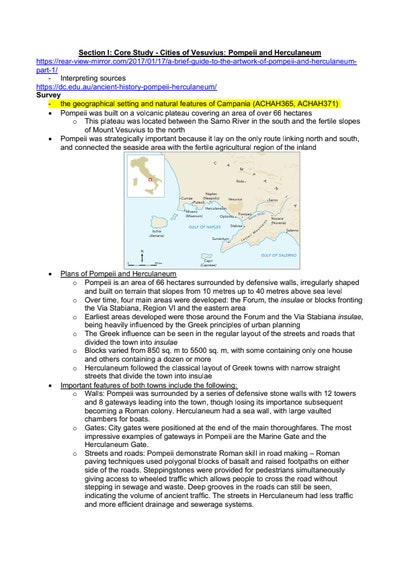