Notes include unit 3 topics such as the problems confronting Rome in 133 BC; reasons for the reforms of Tiberius and Gaius Gracchus; the traditional roles and powers of the tribunate; the lex agraria; the reforms of Gaius Gracchus; the methods used by the Gracchi; the political, economic and social impact of the reforms; and the challenge to the power and authority of the Senate. Marius’ First – Sixth consulships, the reasons for these consulships, the commands against Jugurtha, the Teutones and Cimbri; Marius’ military reforms; the role of tribunes; the rise of client armies and the tribunate; and the challenge to the power and authority of the Senate and the Roman Republic. The origins, key events and individuals of the Italian/Social Wars and the subsequent changes to citizenship. Sulla’s consulship, Mithridatic command, First March on Rome, overview of the Mithridatic War and the consequences; Sulla’s Second March on Rome and the Civil War; Sulla’s dictatorship, the effectiveness of the so-called ‘Sullan Restoration’, including the reforms to the tribunate and Senate; and significance of the increasing use of violence and the military as political weapons. The reasons for, and nature of, the extraordinary commands of Pompey up to 63 BC and their impact on the power and authority of the Roman Republic/SPQR, including the commands against Lepidus, Sertorius and Spartacus, the lex Gabinia and lex Manilia, and the role of the tribunate. Cicero’s consulship, the key events and outcome of the Catiline Conspiracy and the Concordia Ordinum. The role and impact of violence in Roman politics, including the use of the Senatus Consultum Ultimum, Civil War, use of client armies, and the role of the tribunate. 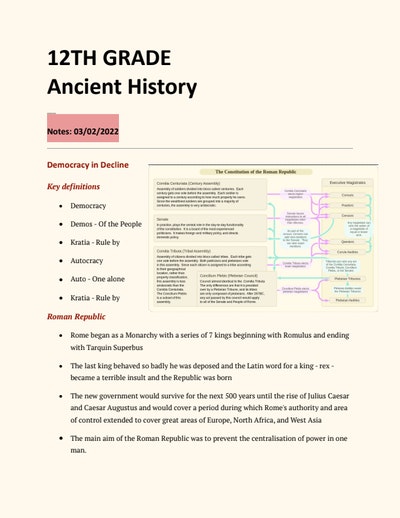